What’s Your Storage? The Benefits of Solid State Drives

We’ve touched on this topic briefly (in our post on how to shop for new computers), but it’s time to go in-depth. Many consumers are unaware of the real dangers that threaten the integrity of their precious family photos or novel manuscripts – dangers related to the failure of their storage medium.

Most consumer-grade computers that are a year old or older feature a mechanical hard drive. Mechanical drives have been standard for decades, and have been swiftly growing in capacity over that time. But the chief problem with mechanical drives is that they have multiple points of failure, and that has never been satisfactorily addressed. 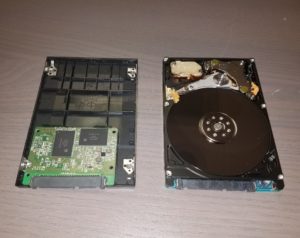 As you can see in this photo, a mechanical drive is made up of platters which spin at high speed and are read from/written to by a mechanical arm with a series of magnetic tips. The motor that controls the arm, the arm, each of the tips, the motor that controls the platters, and each of the platters are all under stress whenever the drive is in use; and with so many parts under stress, it’s inevitable that one or more will fail. In fact, according to long-term studies of mechanical hard drives, 50% of all hard drives fail in the first 6 years of their life.

In practical terms, this means that a large portion of our job, as a technical support company, is recovering data from dead or dying hard drives, and performing preventative maintenance to ensure our clients’ hard drives don’t die and take their data with them. Part of that includes instituting backup plans, which we’ll cover next week, but the most important part of that is replacing mechanical drives with solid state drives. Here are a few of the reasons why:

If you have a netbook, or laptop computer, you’ve probably dropped it at least once before. Mechanical hard drives are very sensitive to shock, especially when they’re powered on and running. If you drop a hard drive, unless it’s very well packed, its data is likely to be partially compromised or completely destroyed. This is not the case with SSDs. Solid state drives function by passing electrical impulses through chips on a printed circuit board – as a result, there are no moving parts to be compromised by sudden impacts or movement, and even a drop from two or three stories will do little to affect their ability to store and access data.

As stated, roughly 50% of mechanical hard drives will fail in the first 6 years of their life. This is a combination of poor quality manufacturing, random failures, and failures caused by wear and tear. Solid state drives, however, have their lifespans measured not in running time but in terabytes written (TBW). A terabyte is a measure of data equal to 1000 gigabytes (for reference, a high definition movie you download from iTunes or Amazon is about 5 gigabytes). The Samsung 840, 850, and 860 series drives we’ve recommend to our clients are rated from 75-600 TBW depending on their relative size, but like many other SSDs, have routinely tested in the 300-2400 TBW range. This means that even at the lowest performing end of the spectrum, you would have to download two HD movies every day for twenty years to exceed the drive’s rating. In reality, the average consumer writes less than 2 gigabytes to their drive per day, between app usage, updates, and downloads; so SSDs are undoubtedly the best choice for a long life.

Every other feature of an SSD is great, but this is the single greatest quality-of-life improvement over mechanical hard drives. Even the worst SSD is at least three times faster than a mechanical hard drive, and the best are 5-10 times faster for everyday use, such as booting Windows, opening programs, or moving files and folders around. If your computer is running slow, and the culprit is not software or outdated hardware, swapping your hard drive for an SSD will make it run faster than it ever has.

In short, SSDs are the best choice all around. If you need to store large amounts of data for a long time, mechanical drives are still the best option, but if you need speed, reliability, and durability, an SSD is the way to go. If you have any questions about the SSDs we recommend or what computers with built-in SSDs are the best, don’t hesitate to get in touch with us! We’d love to help you find the best hardware for your needs.