Computer Viruses: What are they?

Computer Viruses are the Definition of trouble

All over the world, computers and other devices that are connected to the internet are at risk of becoming infected by a computer virus. But what is a computer virus, anyways? Like with humans, a virus can make your computer “sick”, and can be spread from computer to computer. A computer virus is described as a program that infiltrates your computer’s defenses, disrupting normal computer functions, and can even delete programs, files, and can even wipe your hard drive clean. Some viruses simply make things frustrating, and are intended as pranks. Others, though, have a more destructive purpose, and can make things very difficult, and can even wind up costing you money for repairs. 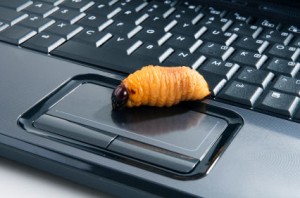 Today, there are several different types of viruses. Most of them infect your computer through attachments in emails, or by clicking on popup ads, or even simply visiting a website. Some viruses are harmful, and others malicious, but not a real threat, as stated previously. Sometimes, all that happens is that you get spyware dumped in to your system. Every week, a new, stronger virus is being created, making antivirus companies stay on their toes. But what are the different types of viruses out there?

• Trojan Viruses – This type of virus is probably the kind that is most often encountered. They lie in wait on websites, popup ads, and emails, and don’t make themselves out to be threats. Some get caught right away by antivirus software, and are easily taken care of. Others, though, can be a bit sneakier. Trojans can be disguised to look like a legitimate file. But the second you open that file, you’ve infected your computer. Some Trojans are destructive, and others dump spyware in to your system.

• Worm Viruses – A worm is a very serious risk to your computer, and others. Worms are defined as a sub-class of viruses, and can spread without any interaction from users. When a worm infects your system, it uses file and information transfers to carry itself in to your system. Email is the preferred choice of travel, but really, you can pick them up just about anywhere, at any time, and they don’t always make themselves known to your antivirus. The most dangerous part about a worm is that it can make replications of itself, and if it is in your email, it will infect every single person you have listed as email contacts. They are destructive, and can wipe out hard drives.

• Blended Threats - These are probably the most sophisticated form of a virus attack. Blended threats combine some of the worst attributes of malware, viruses, worms, and Trojans in to a single, but very serious threat. They aren’t encountered very often, but when they are, watch out. They use vulnerabilities within your system to infiltrate, infect, and spread. They are also capable of spreading to other computers, like a worm does. But they don’t attack just one part of your computer. In fact, they are capable of launching multiple attacks to .exe files, HTML files, and so on all at the same time.

Now, this should be obvious to most. The best way to remove viruses and protect your computer is by investing in antivirus software. Sure, you can download some antivirus programs for free, but they don’t offer the full protection plan like the programs you purchase. Depending on what you do while on the internet will determine what kind of antivirus program you need. If you just play games, and surf the web for leisure, then you don’t need anything overly fancy. But if you run your business on the web, like web designing and other such occupations, then you might want to spend a little extra and get the more advanced programs. Of course, these are just opinions and suggestions. In the end, it’s personal preference on what you get.